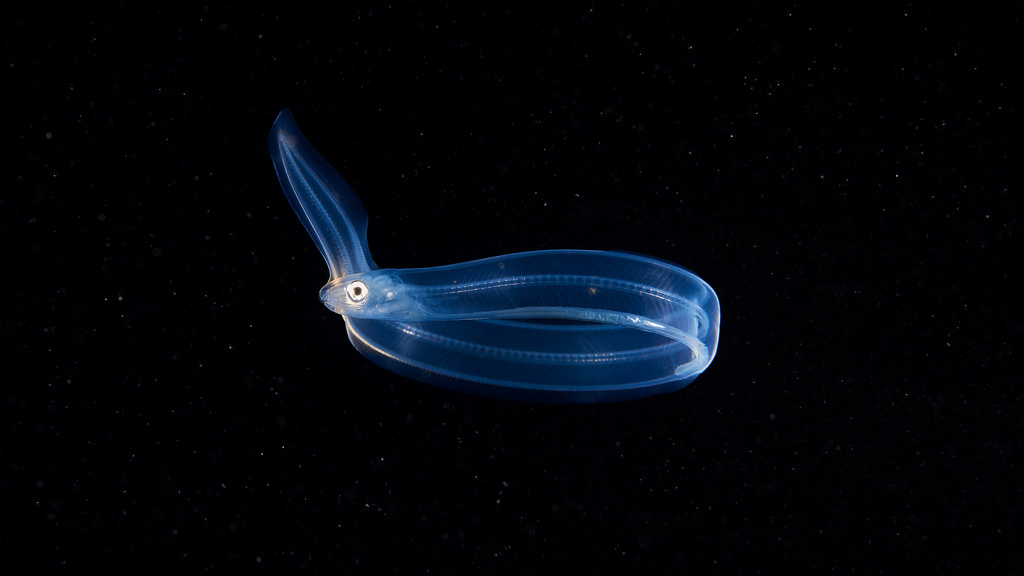 Leptocephalus (meaning “slim head”) is the flat and transparent larva of the eel, marine eels, and other members of the superorder Elopomorpha. This is one of the most diverse groups of teleosts, containing 801 species in 4 orders, 24 families, and 156 genera. This group is thought to have arisen in the Cretaceous period over 140 million years ago. Fishes with a leptocephalus larval stage include the most familiar eels such as the conger, moray eel, and garden eel as well as members of the family Anguillidae, plus more than 10 other families of lesser-known types of marine eels. These are all true eels of the order Anguilliformes. Leptocephali of eight species of eels from the South Atlantic Ocean were described by Meyer-Rochow. The fishes of the other four traditional orders of elopomorph fishes that have this type of larvae are more diverse in their body forms and include the tarpon, bonefish, spiny eel, pelican eel and deep sea species like Cyema atrum and notacanthid species, the latter with giant Leptocephalus-like larvae.

Leptocephali (singular leptocephalus) all have laterally compressed bodies that contain transparent jelly-like substances on the inside of the body and a thin layer of muscle with visible myomeres on the outside. Their body organs are small and they have only a simple tube for a gut. This combination of features results in them being very transparent when they are alive. Leptocephali have dorsal and anal fins confluent with caudal fins, but lack pelvic fins. They also lack red blood cells until they begin to metamorphose into the juvenile glass eel stage when they start to look like eels. Leptocephali are also characterized by their fang-like teeth that are present until metamorphosis, when they are lost.

Leptocephali differ from most fish larvae because they grow to much larger sizes and have long larval periods of about three months to more than a year. Another distinguishing feature of these organisms is their mucinous pouch. They move with typical anguilliform swimming motions and can swim forwards and backwards. Their food source was difficult to determine because zooplankton, which are the typical food of fish larvae, were never seen in their guts.

Leptocephali appear to feed on tiny particles floating free in the ocean, which are often referred to as marine snow. Leptocephali larvae live primarily in the upper 100 metres (330 ft) of the ocean at night, and often a little deeper during the day. Leptocephali are present worldwide in the oceans from southern temperate to tropical latitudes, where adult eels and their close relatives live. American eels, European eels, conger eels, and some oceanic species spawn and are found in the Sargasso Sea.

Leptocephalus brevirostris was declared as a biological species in 1856, but was later found to be the larva of Anguilla anguilla, which was declared by Linnaeus in 1758 and thus has priority.