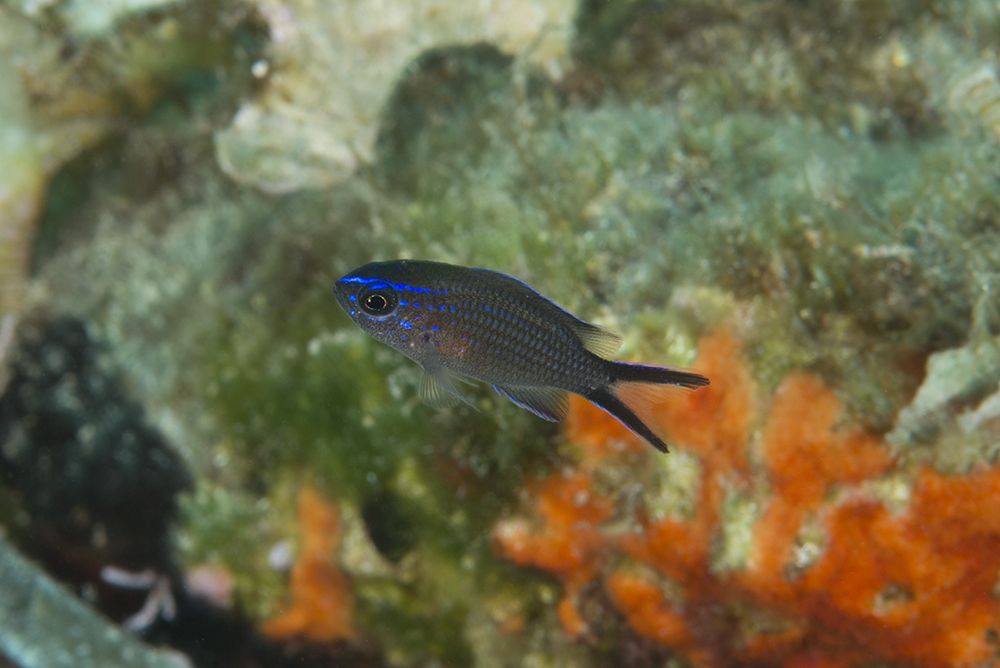 I recently posted about cardinals and how they got their name: how one red fish in the Mediterranean gave its name to a family of fish found across the globe.  On a similar theme, I thought I’d have a quick look at the ‘original’ chromis, another fish from the Med.

Chromis chromis is a widespread species; I think I’ve seen a shoal of them on just about every dive I’ve ever had in the Med.  They’re so common that I tend to overlook them entirely, which is a shame, as the juvenile is a very pretty fish with intricate blue markings.  These are lost as the fish matures and it becomes quite drab.  The fry are quite spectacular with a prominent blue streak.

C. chromis are found throughout the Med, the Black Sea, and the Eastern Atlantic where they are occasionally caught for the kitchen.  I suspect they will become the favorite food of Lionfish as they spread throughout the region.

So what’s in a name?  Well, the Chromis was officially named by Linnaeus according to Fishbase.org, though another source suggests Cuvier redefined the species in 1814, after Linnaeus’ earlier classification of Sparus chromis.

As for the meaning of ‘chromis’, well, according to Fishbase again, chromis simply means ‘a fish, perhaps a perch’.  A quick dig on Merriam Webster offers a confusing entry that could take you down a real linguistic and etymological rabbit hole.  If we have any classics scholars reading this, please let me know if I’m on the wrong track entirely.

I personally find this quite unsatisfying and I was hoping for something a little more interesting. However, the fact remains that this is the first fish to be used to define the rest of the family.

The post Chromis chromis, the First of a Common Genus appeared first on Reefs.com.